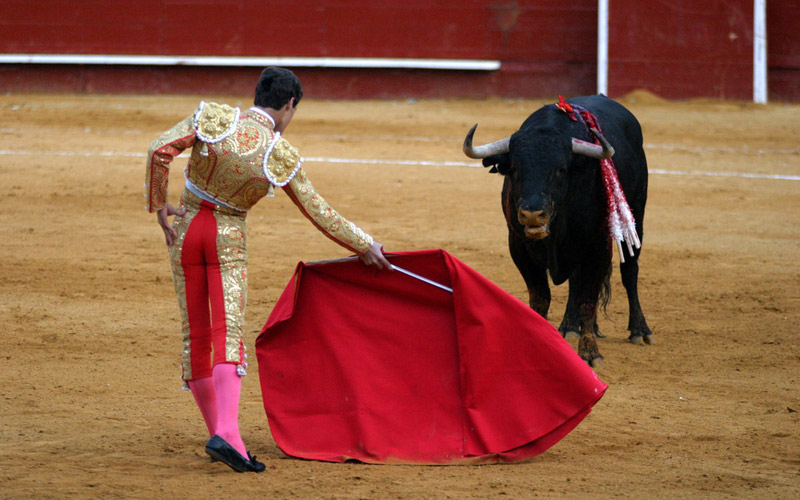 When there is a lesson for you to learn, the universe will sometimes whisper gently in your ear. Other times, it will wallop you over the head with a sledgehammer! I unfortunately experienced the latter as my wife and I prepared to move halfway across the country to be closer to our daughter.

In an earlier post, I talked about how I overlooked red flags and ignored my HSP intuition when I hired a long distance mover to relocate us from New Jersey to Missouri. Sadly, all of those unheeded, red flags were about to morph into a giant, red cape to be waved in front of my face by a diabolical matador! Okay…perhaps I’m being a bit dramatic, but our moving troubles were about to go from bad to much, much worse. Our highly sensitive nervous systems would be severely tested!

Just to recap, I usually follow my intuition, but in this case, I was under pressure to find someone quickly, and we had so much to do to prepare for the move. When I wasn’t able to get a recommendation from people I knew, I made my selection based on online reviews.

Almost immediately, I had concerns. The moving company was not responsive, and I sensed they weren’t being thorough. I also had trouble pinning down the costs. We had received a preliminary estimate, but the final estimate ended up more than doubling! At that point, moving day was fast approaching, and we were busy packing, so we reluctantly agreed to the new estimate. All of these things were red flags, but I overlooked them because I was overwhelmed with other tasks. I felt I didn’t have the time or energy to find someone else.

When moving day arrived, I feared for the worst, and my worst fears were realized! The movers showed up with an undersized truck that didn’t fit all of our belongings! With our closing just days away (ironically, our wedding anniversary), we had to scramble to figure out what to do with everything that wouldn’t fit on the truck. We ended up storing our things in our neighbor’s garage, and I rented a cargo truck to transport these things to a storage facility in Missouri. I had to make three 950-mile trips between Missouri and New Jersey!

As my wife and I looked for a house to buy in Missouri, the moving company held our items in a nearby storage facility. After the fiasco in New Jersey, I was terrified of what would happen next, but there was nothing I could do to get out of the moving contract. I crossed my fingers and hoped that the rest of our move would go smoothly — but sadly all those red flags were about to come home to roost!

Upon delivery in our new home, we found that a good portion of our belongings were damaged. Many pieces of our antique, oak furniture were damaged…some beyond repair. Several glass pieces were smashed. My wife and I were livid! We couldn’t believe what we were seeing as the items came into the house! We had paid to have our most prized possessions taken apart, wrapped up, and transported in a professional manner, but these items were definitely not wrapped or handled properly!

On the day of the move, a different supervisor from the same moving company came with three different men. I asked him if he had a business card, and he said he didn’t have one. The supervisor slept in the truck, while the three men brought our things into the house. As soon as we noticed that many items were broken, we woke up the supervisor and let him know how upset we were. He said it wasn’t his fault and suggested we call the main office. The main office told us to take pictures of the damaged items and promised to send a claim form. Because of the damaged items, the furniture was not put back together, a service that we had paid extra for.

As soon as the movers were finished, the supervisor took off in his truck, leaving his three helpers behind! We found out that the supervisor had hired them from Craigslist for $13.00 per hour. Two of the helpers didn’t have a ride home, and the other one’s car had a flat tire.

Even though my wife and I were furious with the moving company, we understood that the problems were unlikely the fault of these three men. I suspected that the damage had occurred in transit or at the storage facility, since it was easy to see how poorly packed the items were. We did our best to compartmentalize our anger and do what we could to help these guys out. We loaded the flat tire and everybody into our car and drove to a tire place. The tire was unfortunately beyond repair, and the guy said he didn’t have any money, so I bought him a new tire! We then drove back to our house where we all helped to change the tire. He drove off with one of the men, and we took the other guy home. This experience seemed like an episode out of “The Twilight Zone!”

In summary, our mover had hired a subcontractor, who in turn had hired other subcontractors to handle our move. This was NOT what we had signed up for! The company had touted all of their experience with long distance moves and led us to believe that their “professional” movers would be handling everything. To make matters worse, when we finalized our contract with them, we had to sign numerous forms to absolve the company of any liability. My wife and I were at our wits end! Everything that could’ve gone wrong did, and much more! Given our experience with this company, we knew that this was NOT going to be an easy matter to resolve.

While I knew that we would have to figure out how to respond, I realized that it was not the time to think about that. We would deal with the movers another day. At this time, I needed to decompress. I took slow, deep breaths through my nose, and then slowly exhaled through my mouth until I felt centered. It wasn’t until that moment that it actually sunk in that the move was OVER! I had been so worried about moving day that I hadn’t even contemplated what our long-awaited first night in our new home would actually feel like. In spite of everything that had happened, it was a time to celebrate…we had reached the end of our multi-year journey and had FINALLY accomplished our goal!!

After this experience, the key take-away for me was that red flags should, in many cases, become deal breakers, no matter how inconvenient it may be to start over again! The short-term relief is just not worth the long-term pain. As much as I regretted the way things turned out with the movers, I made a conscious decision to NOT berate myself or start asking a bunch of “what ifs.” Going down that road wouldn’t change anything and would only make me feel worse. I would learn what I could from the situation and do my best to move on and be grateful for what we were able to accomplish.

How do you handle “worst case scenario” situations? What strategies do you have for managing crisis or for controlling your anger? Are you able to keep your emotions in check, so that you take rational action when things go terribly wrong? Can you compartmentalize your feelings, so that you can learn from your mistakes but also appreciate your successes? I’m interested in any thoughts or comments that you have.

If you found this post useful, I would appreciate it very much if you would share it with others!

The next post, (17) Do You Want To Be Happy Or Right?, is about choosing to walk away from things that aren’t good for me, even when I’m in the right.