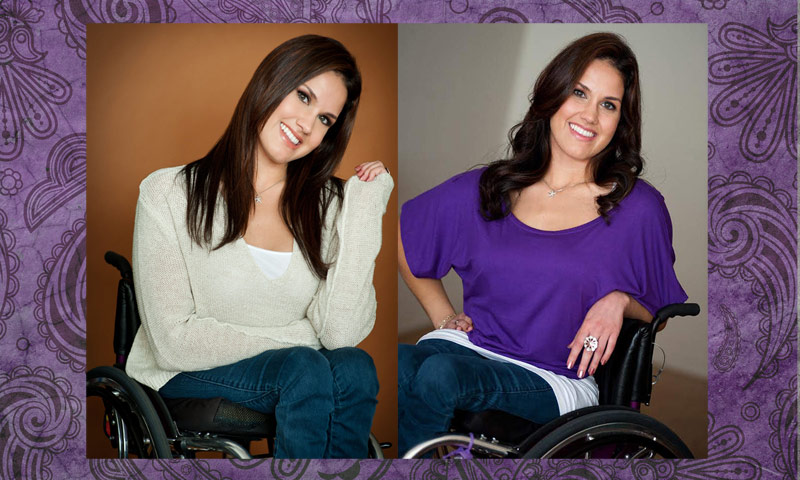 Highly sensitive people and introverts often grow up feeling “different.” We struggle to fit in, adapting as much as we can, though those isolating feelings rarely go away completely. With that in mind, I wanted to share an uplifting story I came across about a young woman who wasn’t afraid of being different and sought to challenge stereotypes rather than conform to the expectations of other people.

Santina Muha is a Rutgers University alumna, writer, fashion model, public speaker, actress, comedienne, and internet personality. I almost forgot to mention that she is also a T-11 paraplegic. In March of 1989, when Santina was 5 years old, she was in a car accident that left her paralyzed from the waist down with a spinal cord injury. She says that many people are not able to see past her disability, a perception she is determined to change.

Santina is active in the disability community. She worked as a Communications Associate for the National Spinal Cord Injury Association(NSCIA), an internet reporter for CNN, a co-host of various online programs, a mentor to kids in wheelchairs, and an inspirational speaker.

Throughout her life, Santina has never allowed her disabilities to curb her potential. In November of 2007, Santina was the first contestant to use a wheelchair on the game show, Who Wants to Be a Millionaire? Her love of fashion led her to seek modeling opportunities, despite limited demand for models with disabilities. She appeared in an advertising campaign for Target stores and was also named “Ms. Wheelchair New Jersey” in 2009. In 2011, Santina moved to California, where she successfully pursued comedy and acting roles. She is known for her work on Comedy Bang! Bang! (2012), One Day at a Time (2017) and Don’t Worry, He Won’t Get Far on Foot (2018).

Below is a clip of Santina talking about wheelchairs and dating (PG rating). I love how she uses her comedic talent to challenge perceptions about people in wheelchairs. I can’t think of better way to break down barriers!

Santina was featured in the documentary, Defining Beauty, an award-winning film that follows the inspirational lives of five women with disabilities who challenge stereotypes. She hopes that the movie’s message will point out that disabilities don’t define you and that you can do many things regardless of your life circumstances. Contrary to popular belief, Santina states that most people in wheelchairs live happy and accomplished lives.

As a highly sensitive person and introvert, I was especially touched and inspired by Santina’s story. Against all odds, Santina demonstrates how to leverage your strengths, challenge perceptions, and make an impact in the world. She refuses to let her disabilities or feelings of “being different” get in the way of who she wants to be or what she wants to accomplish.

Her message coincides nicely with mine. The driving force behind all of my work is to help highly sensitive people and introverts make the most of their strengths and become the people they want to be, regardless of what anyone else thinks. We may feel different, but we can’t let that be a reason to “handicap” the way we think about ourselves. Kudos to Santina for showing us, on a grand scale, how it’s done!

Do you worry too much about what others think of you? Do you focus more on the things you can’t do than on the things that you can do? Does your perception of yourself limit what you believe you can accomplish? If so, what specific actions can you take to have a better vision of yourself? I’m interested in any thoughts or comments that you have.